Find out more about the Niskin bottle

With today’s post, we want to tell you about the history of the Niskin bottle.

First of all, the Niskin bottle is an instrument that is widely used in the world of oceanography to take water samples at different depths, manually or in combination with an oceanographic rosette.

It was invented by Shale Niskin, who patented the Niskin bottle in March 1966 and based his design on the Nansen bottle, invented by Norwegian Fridtjof Nansen. 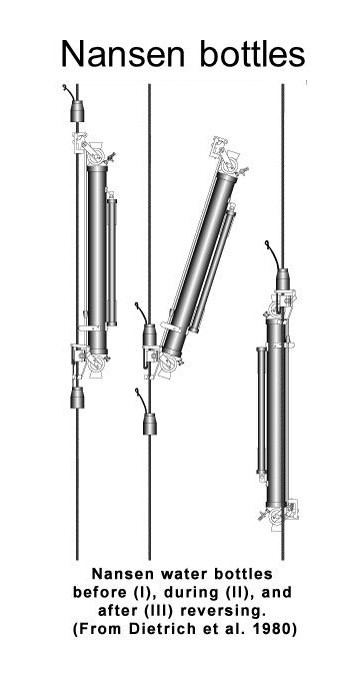 What is a Nansen bottle?

The Nansen bottle was a metal cylinder with two closing mechanisms at both ends. The bottle would be lowered to the required depth (where the water sample would be taken) and a weight, called a “messenger”, would be dropped down the main line. This weight would reach the bottle and cause the top end to release from the line, tipping the bottle upside down, triggering the valves on both ends and trapping the water sample inside.

That’s how it evolved until the Niskin bottle

Shale Niskin took the Nansen bottle and developed a bottle made of plastic elements (PVC), with no metal elements on its interior. His modification prevented several chemical reactions from occurring between metal and sample water, which could alter how certain substances are measured. Its closing mechanism was also triggered by a messenger but this bottle also had two lids that would close the cylinder and trap the sample by means of elastic elements. Little by little, the Nansen bottle was superseded by this new invention. The Niskin bottle has become one of the most important water sampling instruments in the field of oceanography.

The NK Niskin bottle that we manufacture in Aquatic Biotechnology is the result of combining knowledge and experience in using this type of bottle, creating a easy-to-use Niskin, which also meets the quality standards required by researchers. We also have a wide range of replacement items (bands, seals, plugs, etc.).

Find out more about our oceanographic bottles.

You can unsubscribe here.